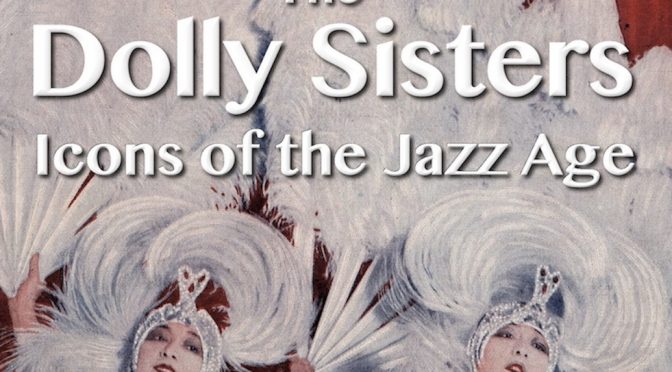 The Dolly Sisters: Icons of the Jazz Age by Gary Chapman

The  Dolly Sisters biography is a  dizzying cocktail of delight, extravagance and pathos. Teeming with fantastic and fascinating stories from the Jazz Age of the twenties and thirties, it tells a true story every bit as dramatic and engrossing as the best fiction

The rags to riches story of identical twins Jenny and Rosie is set against the glittering backdrop of high society in America and Europe before the onset of the Second World War. They had a colourful life where nature’s duplicity enabled a highly successful career as dancers which made them ‘stars’. And yet, lurking behind their glamorous story of fame, fortune, mistaken identity, millionaires, love and sisterly devotion – that made them legends – is another of rivalry, duplicity and tragedy.

The book perfectly captures both the Dollies and their world. They were close friends of the elite of Broadway and Hollywood – Mary Pickford, Norma Talmadge, Pearl White, William Randolph Hearst – and, having been pampered by millionaire ‘Diamond Jim Brady’, they developed a taste for wealthy men and their high profile love affairs with the rich and famous became the subject of gossip. Jenny cast a spell over the London Department store owner Gordon Selfridge (originally from the USA). Rosie attempted to acquire a fortune by marrying and then swiftly divorcing the Canadian multi-millionaire Mortimer Davis Jr and then fell in love and married Irving Netcher, a leading member of Chicago society. But none was more sensitive than their liaison with the future Edward VIII. In later years both sisters lived in America – Jenny committed suicide in Los Angeles in 1941 and Rosie died in New York in 1970.

Praise for The Dolly Sisters

(published in hardback as The Delectable Dollies)

‘They seduced tycoons, Kings and even the Prince of Wales with their exotic dance routines. But… the Dolly Sisters’ quest for fame and fortune had devastating consequences.’ Daily Mail

‘Forget Kylie Minogue for pure unadultrated glamour because two sisters held that crown before she shook her derriere at audiences around the World.’   Sunday Express

‘The Queens of Twenties and Thirties cafe society, with more diamante than you could shake a feather at.’  Tatler

‘A potent cocktail given due weight in Chapman’s effervescent biography.’  The Good Book Guide

‘A labour of love…. Chapman is scrupulous in not presenting speculation as fact… By not probing too deeply, (he) is at least consonant with the period, for the Dollies inhabited a curiously innocent, pre-freudian world.’  Sunday Telegraph

‘A thoroughly researched story of the beautiful twenties twins, as remarkable for their social as their theatrical life.’ The Stage

‘Jenny and Rosie outshone everyone in exuberance and high living. If celebrity is a devalued currency these days, then they were the gold standard. But their glittering lives also reflect the potentially tragic nature of the pursuit of fame and fortune.’ Daily Mail

Gary Chapman has always been fascinated by the 1920s and the Jazz Age, and his degree in archaeology left him with a passion for uncovering the truth about his subjects. After living and working for many years in London, Gary now lives in Stroud, Gloucestershire. He is fortunate in being able to pursue his various passions – publishing, marketing books, writing, the Jazz Age and cake decorating.